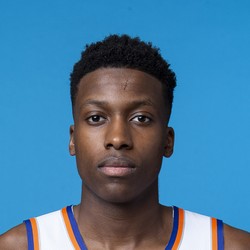 Frank Ntilikina is expected to remain with the Knicks due to his "strong connection" with New York's Team President Leon Rose.

Knicks' GM Scott Perry has never been a fan of Ntilikina and has reportedly shopped the 21-year-old guard often, per Marc Berman of the New York Post. Team President Leon Rose has a strong connection with Ntilikina and Berman believes he will remain with the Knicks. Ntilikina is an elite perimeter defender and did show flashes of offensive potential(dropping a career-high 20 points in March 10th's loss to the Wizards) in the 2019-2020 campaign. He averaged 6.3 points, 2.1 rebounds, 3.0 assists, 0.9 steals and 0.8 triples across 57 games this season.

Brad Camara6 weeks ago
Frank Ntilikina a part of the future in New York?

According to Knicks reporter Ian Begley, "Leon Rose (new team president) isn't going to be out there shopping Frank Ntilikina as the Knicks had been previously.”

Begley goes on to state that he doesn’t believe anyone on the Knicks roster is off limits at this point, but Ntilikina shouldn’t be at the center of trade conversations like he previously was during most of last season. A former eighth overall pick in 2017, Ntilikina has all the potential, but has yet to really find a level of consistency in the league, averaging just six points, 2.2 rebounds, and 3.1 assists in just over 21 minutes per game in his three-year career with the Knicks. If he can lock himself in as a starter with minutes north of 25, Ntilikina has shown he has the ability to produce at a high level in the NBA.

Frank Ntilikina scored eight points, had four rebounds, and two assists in 23 minutes off the bench in a 136-131 overtime win over the Hawks.

Ntilikina on the season is averaging 6.3 points, 2.1 rebounds, and three assists a game. He has played better of late averaging 8.7 points during the last 10 games.  It is unclear when the next NBA game will be due to the coronavirus.

Ntilikina did all his damage off the bench tonight and had the Knicks rolling in the first half. His fantasy value will continue to be hindered as long as he is playing off the bench. He should only be owned in keeper and dynasty leagues.

Frank Ntilikina (groin) has been ruled out for Thursday’s game against the 76ers.

Ntilikina was downgraded doubtful earlier in the afternoon, and was ultimately ruled out. Look for Dennis Smith to draw the start and see an expanded role. Ntilikina is currently day-to-day. His next chance to return will be Saturday against the Bulls.