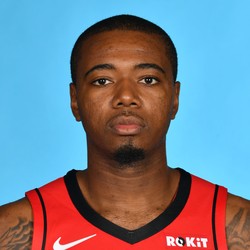 Gary Clark scored five points on 2-for-3 shooting with three rebounds, one assist, one block and one three-pointer over 29 minutes in Monday’s loss to the Blazers.

Clark picked up the start on Monday at forward with Aaron Gordon out with a knee issue. The 25-year-old forward did not do much with the extra time and can be left on the waiver wire by fantasy owners.

Gary Clark did not see any action on Friday night as the Magic defeated the Timberwolves by a 136-125 score.

Clark has been dealing with a left knee irritation but was not listed on the injury report before Friday's game. The 25-year-old forward has not played in the last three games for the Magic and looks to have lost his role in the rotation. Clark can be dropped in all fantasy leagues.

Gary Clark scored eight points on 2-for-3 shooting with four rebounds, two three-pointers and one block over 16 minutes as the Magic lost to the Bucks on Saturday by a 112-95 score.

The good news for Clark was that he was signed to a year-long deal Saturday. Clark, who had completed two 10-day contracts with the team, will remain in Orlando for the remainder of the season.

Gary Clark scored three points on 1-for-3 shooting with two rebounds, one assist and one three-pointer over 14 minutes as the Magic lost to the Knicks on Thursday night.

Clark is currently on his second 10-day contract with the Magic. The 25-year-old forward is averaging 3.6 points and 2.5 rebounds over 13.3 minutes since joining the team and right now it is not known if the Magic will keep Clark on the roster for the remainder of the season.

Gary Clark shot 0-for-2 from the field with four rebounds over 11 minutes as the Magic lost to the Heat on Saturday night by a 102-89 score.

Clark just recently agreed on a second 10-day contract as the Magic picked up the 25-year-old forward for depth with the team dealing with injuries. Clark has not made a big impact and can be left on the waiver wire by fantasy owners.