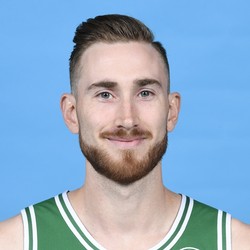 Gordon Hayward scored 27 points on 10-for-19 shooting with 10 rebounds, five assists, three three-pointers, two steals and one block in 36 minutes during Tuesday's 114-111 win over the Pacers.

Hayward picked up his eighth double-double of the season as the veteran forward was able to provide fantasy owners with across the board stats on Tuesday. Hayward remains a must-own in all fantasy leagues.

Gordon Haywood scored 24 points on 9-for-19 shooting with five rebounds, four assists, four three-pointers, a steal and two blocks with zero turnovers in 38 minutes of a tough 105-104 loss to the Thunder on Sunday.

Hayward missed the last two games with a bruised knee and was a game-time decision on Sunday but was able to play and had a solid game. The veteran forward remains a must-own in all fantasy leagues.

Gordon Hayward (knee) has been upgraded to probable ahead of Sunday night’s game against Oklahoma City.

Hayward has missed the last two games with the right knee contusion, but it looks like he’ll be able to return on Sunday. Hayward’s return will send Semi Ojeleye back to the bench. Jaylen Brown (hamstring) remains out for the Celtics on Sunday.

Brad Stevens said the latest he has heard is that Hayward is day-to-day but remains OUT tonight against his former team the Utah Jazz.

The most likely scenario is that Hayward sits out Sunday as well and returns on Tuesday when the Celtics take on the Pacers in Indiana but check back prior to Sunday's contest against OKC.

Gordon Hayward (knee) has officially been downgraded to out ahead of tomorrow night’s contest vs. Utah

That was a quick downgrade to out a full day before the game. That makes us believe the injury could potentially cost Hayward a couple more games. Jaylen Brown (hamstring) is also out for Friday’s game. Look for Grant Williams or Semi Ojeleye to start against Utah with increased usage for Jayson Tatum, Marcus Smart, and Kemba Walker (knee) if he plays.