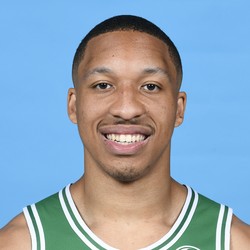 Celtics rookie F Grant Williams has been staying active and working on his ball-handling skills during the NBA shutdown.

Williams received an invitation from teammate Kemba Walker to live with him in Charlotte during the NBA shutdown. He has been taking full advantage of the opportunity, fine-tuning his ball-handling skills learning from one of best point guards in the league. At 6’6”, Williams is an undersized forward in the NBA. Improving his ball-handling skills will only improve his overall game and help him see more minutes in Boston if he can bring the ball up the court. He was drafted by the Celtics for his overall basketball knowledge and high intensity on the defensive end, but he could increase his value in due time learning the point guard position from Walker. For the season, Williams was averaging 3.5 points, 2.7 rebounds, one assist, 0.5 steals, and 0.5 blocks in 15 minutes per game prior to the shutdown.

Grant Williams picked up one steal and did not accumulate any other stats on Tuesday as he played just three minutes as the Celtics beat the Pacers by a 114-111 score.

Williams continues to struggle to find playing time of late and over his last 10 games is averaging 2.1 points and 2.7 rebounds over 16.1 minutes. The rookie is only worth owning as a stash in dynasty formats by fantasy owners.

Grant Williams scored eight points on 4-for-6 shooting with five rebounds, one assist, one block and one steal across 26 minutes in Wednesday's 112-106 win over the Cavaliers.

With Jaylen Brown (hamstring), Kemba Walker (knee) and Gordon Hayward (knee) all inactive, Williams made his fifth start of the season on Wednesday. Look for the rookie to continue to see minutes but is not worth picking up by fantasy owners except in deeper fantasy formats.

Grant Williams scored two points on 1-for-1 shooting with three rebounds over 14 minutes on Saturday night as the Celtics lost to the Rockets by a 111-110 score.

Williams has struggled in the five games since the All-Star break averaging just 1.2 points and 2.8 rebounds over 15.4 minutes. The rookie can be left on the waiver wire by fantasy owners.

Grant Williams scored four points on 1-for-2 shooting with one rebound and one steal over 13 minutes as the Celtics lost to the Lakers on Sunday by a 114-112 score.

Williams has been struggling to see playing time of late and over nine games in February is averaging 5.8 points and 2.9 rebounds over 17.7 minutes. The rookie can be left on the waiver wire in fantasy leagues by owners.

John Aubin19 weeks ago
Should I Trade...?
Do Not Sell
Are you looking to contact Customer Support about a subscription or account related question?
Yes
No, I'm a California resident looking for the California Consumer Privacy Act form