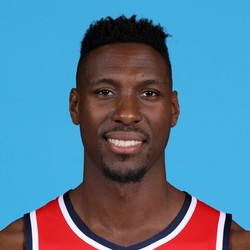 After two months of what felt like a million near double-doubles, Mahinmi finally got his first double-double of the season against Miami. Wednesday also marked the second time this campaign the veteran crossed the 30 minute threshold.

Mahinmi went off for one of his best scoring efforts of the 2019-20 campaign, and his well-rounded stat line made this one of the big man's most complete efforts of the season. Though Thomas Bryant is back in the fold, he's coming off the bench for now, and Mahinmi has retained his starting role. His recent play has made him a starting fantasy center in 12-team leagues over the last two weeks, averaging 12.2 points, 7.0 rebounds, 2.8 combined blocks/steals and 2.2 assists across five games in that span. As long as he's in the starting five, keep riding the hot hand.

Mahinmi's rough night shooting(2-7 in field-goals) cost him his third consecutive double-digit point outing but he remained solid, once again flirting with a double-double over 30 minutes on the court. The veteran is starting to produce at the right time also with starting center Thomas Bryant returning to Washington's lineup, likely securing the 2nd spot on the depth chart.

Mahinmi dished out a career-high seven assists and has now scored double figures in back-to-back games. His role in the offense will decline as Thomas Bryant has returned from a six-week absence. Mahinmi can be used as a streamer while Bryant works his back into his usual role. The Wizards next scheduled game is Wednesday, away against the Bulls.

Mahinmi took a big step forward on Friday, scoring 12 points on 11 field-goals, both of which being by far his most thus far in January. The veteran will need to keep it up, however, to secure a significant role in Washington's plans upon Thomas Bryant's return.