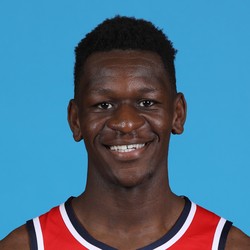 Rookie Isaac Bonga saw a career-high 31 minutes during the Wizards' win over the Celtics on Monday night. With the Wizards deploying a smaller lineup, Bonga was able to rack-up 10 points and seven rebounds in the process. Bonga has accumulated over 20 fantasy points while scoring in double-digits in each of the past two games. With Bradley Beal ailing and fellow rookie Garrison Mathews going down with an injury on Monday, Bonga may be tasked with starting and playing heavy minutes in the near future. Bonga still has a very limited ceiling and is not a recommended add for fantasy owners. The Wizards will travel to Orlando to face the Magic on Wednesday.

Bonga scored a career-high 15 points in the win on Saturday. Missing only one shot from the field, Bonga was efficient in during his time on the court. Nevertheless, the rookie has demonstrated a floor of almost zero and has extremely limited upside. He should remain on waivers in all leagues. Bonga and the Wizards will host the Celtics on Monday.

Bonga saw little playing time on Friday night and again turned-in an irrelevant fantasy performance. With the return and emergence of Jordan McRae, as well as the solid play of Garrison Mathews and Gary Payton II, Bonga has found himself on the end of the bench. Bonga saw even less playing time than the previous game despite Bradley Beal missing the game with an injury. Bonga should remain on waivers in all leagues. Bonga and the Wizards will host the Nuggets on Saturday night.

It was another typical fantasy performance for Bonga, despite remaining in the starting lineup. As we have come to see, Bonga does not offer anything resembling a useful ceiling and his floor is literally zero fantasy points. Bonga and the Wizards will travel to Philadelphia to take on the 76ers on Saturday.

This was easily Bonga's most productive fantasy game of the season. With Jordan McRae and C.J. Miles injured, Bonga has been afforded some extra playing time a consistent spot in the rotation. While this was a good performance for the rookie, Bonga's ceiling (and non-existent floor) is simply too low to trust even in deeper fantasy leagues. He should remain on waivers despite the nice game. Bonga and the Wizards will host the Bulls on Wednesday night.