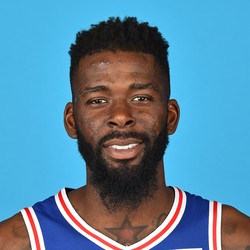 James Ennis III scores three points on 1-for-2 shooting with five rebounds, three assists and one three-pointer over 25 minutes as the Magic defeated the Wolves on Friday night.

Ennis has started the last eight games at forward for the Magic. Over that time he is averaging 7.3 points, 4.9 rebounds and 1.3 assists over 25.8 minutes. Ennis is only worth adding in deeper fantasy leagues.

James Ennis III scored 10 points on 3-for-10 shooting with four rebounds, two three-pointers made and one assist over 28 minutes as the Magic lost to the Blazers on Monday night.

Ennis picked up his sixth start in a row at small forward for the Magic. Ennis is averaging 8.0 points and 4.5 rebounds over eight games since being traded to the team at the trade deadline and is only worth owning in deeper fantasy leagues.

James Ennis III scored eight points on 3-for-6 shooting with eight rebounds, two assists, two steals, two blocks, and two three-pointers over 27 minutes as the Magic lost to the Spurs on Saturday.

Ennis has started all five games since the All-Star break and is averaging 8.2 points and 5.2 rebounds over 25.0 minutes. The veteran forward is only worth adding in deeper fantasy leagues by owners.

James Ennis III scored six points on 3-for-5 shooting with seven rebounds, one assist, one steal and one block over 21 minutes as the Magic beat the Wolves on Friday night.

Since being acquired from the Sixer at the trade deadline, Ennis is averaging 7.7 points and 4.3 rebounds in 21.3 minutes over six games. The veteran forward is not seeing enough playing time with his new team to be worth grabbing by fantasy owners.

James Ennis scored 13 points on 3-for-6 shooting with four rebounds, one assist, one block and one three-pointer over 27 minutes on Monday as the Magic defeated the Nets by a 115-113 score.

Ennis picked up his second straight start at small forward for the Magic on Monday. Overall in four games since being aquired from the Sixers the veteran is averaging 7.0 points and 3.8 rebounds over 19.8 minutes. Unless he can see a bigger role, Ennis should remain on the waiver wire in standard fantasy leagues.