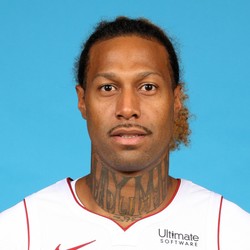 Yahoo SF,PF
ESPN PF
CBS PF
James Johnson continues to be a “Jack of all trades” in loss to the Rockets

James, the “Jack of all trades,” Johnson continued to fill the stat-sheet against the Rockets this past Tuesday. To go along with six rebounds, three assists, and two steals, he also shot 50 percent from the floor and from beyond the arc for a total of 16 points. Since joining the Timberwolves, his game has taken on a new form, and he has been able to play impactful minutes every time he has hit the floor. Yes, Johnson is due to have a poor outing at some point; however, his high-floor and ability to produce fantasy value in a variety of ways make him a must-own in most formats, especially in deep-league play.

Joel E. Ruffin Jr.12 weeks ago
James Johnson continues to play his “game” despite loss to the Pelicans

Johnson continued to showcase his multi-faceted “game” this past Sunday against the Pelicans, as he once again contributed to multiple stat categories. He has maintained his momentum since joining the Timberwolves and has yet to show signs of slowing down. There is always a possibility that Johnson puts up a low floor game, but his return is worth the risk. He is a must-own in all fantasy formats and is a reliable starter until he proves otherwise.

Joel E. Ruffin Jr.12 weeks ago
James Johnson continues to do it all in loss to the Magic

Johnson was active once again on Friday, as he contributed to the Timberwolves’ effort against the Magic in every way he could. For the second game in a row, he managed to stuff all the categories of the stat-sheet. Even though Johnson doesn’t have that one thing he does well, he has managed to do a little bit of everything consistently well. Yes, his limited minute count can be a concern; however, he has been able to show, in the span of the 12 games he has played for the Timberwolves, that he is more than capable of putting up high-impact performances in limited amounts of time. He is still worth monitoring on a night-by-night basis; however, it is safe to say that he is a must-own in every fantasy format, especially in deep-league play.

Joel E. Ruffin Jr.12 weeks ago
James Johnson stuffs the stat-sheet in win against the Bulls

He should consider adopting the name James “The Stat Stuffer” Johnson, as this man has made a habit out of putting up stats in virtually every way possible; unfortunately, this also includes turnovers and fouls, but those are topics for another time. Today we are focusing on the fact that Johnson has managed to completely stuff his categorical stats in six out of the eleven games he has played with the Timberwolves. He has a complete game and has been able to showcase his talent in an environment that allows him to do so. Since joining the Timberwolves, he has averaged 24.3 minutes of played, 8.7 field goals taken, 2.9 three-points taken, 4.8 rebounds, 3.5 assists, and 11.6 points per game. Even though I said his turnovers and fouls were topics for another time, that wasn’t completely accurate; they are a major concern. He is averaging 3.6 fouls and 2.5 turnovers per game; with reliable players like Juancho Hernangomez and Naz Reid waiting in the trenches, this level of un-discipline play has negatively impacted Johnson’s ability to perform at his ceiling. On the bright-side, it can only go up from here, and despite his risky play, he has been able to play with a high-floor and has contributed value-driven play since joining the team. Johnson is worth a roster spot in all formats, but know he comes with a bit of a risk.

Joel E. Ruffin Jr.13 weeks ago
James Johnson back at it again in win against the Pelicans

Back to his impactful ways, Johnson bounced back from his stinker in Dallas in Tuesday’s bout against the Pelicans. He scored 19 points while shooting 57.1 percent from the floor and 50 percent from beyond the arc while adding a fantastic production in the other statistical categories as well. Since joining the Timberwolves, Johnson has been a great source of production, averaging 12 points, 4.9 rebounds, 3.4 assists, 1.4 blocks, and 1.4 steals per game, and has quickly positioned himself well in the rotation. Although fouls will present a challenge, the benefit of his play out-weighs the risk; he should be rostered in all formats.