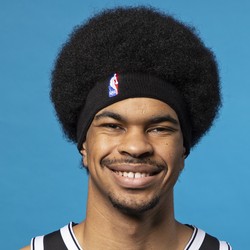 Jarrett Allen only played 13 minutes and was held scoreless (0-4 FG) against Joel Embiid and the Philadelphia 76ers on Thursday night.

Allen had a rough go of it against Philadelphia. He started the game per usual, but he was torched by Embiid during the first six minutes of the game. After that initial run, Coach Kenny Atkinson didn’t give Allen many more minutes, electing instead to use more of DeAndre Jordan (37 minutes). The 13 minutes played were based on the early game results against Embiid, so there is no need to push the panic button on Allen, as he should continue to generate productive stats for Brooklyn as he’s done all year.

Allen had his hands full in this game as he dealt with Serge Ibaka and Pascal Siakam. The center has been a hidden gem for fantasy owners as he averages close to double-double numbers for the season at 11.1 points and 9.6 rebounds per game.

Jarrett Allen managed four points (2-6 FG) 13 rebounds, one assist and one block across 17 minutes in Wednesday's 129-88 win over the Warriors.

Allen continues to dominate the glass as he has now pulled down 13 rebounds or more in three of his last seven games. He is averaging close to a double-double, and is an elite option in defensive categories. Allen is averaging 11.2 points, 9.7 rebounds, 1.4 assists and 1.5 blocks across 50 games this year. The Nets next scheduled game is Saturday, away against the Raptors.

Allen went off for a big double-double Saturday, nearly matching his rebounding total across his last three games combined in the loss to Washington. The big man has made his bones this season with rebounding and blocks, though his facilitating skills have been on display as of late, with five assists in consecutive contests.

Allen has now swatted at least two shots in four consecutive games. He contributed a little bit in every category in Friday's win over the Bulls, chipping in with five assists, five rebounds and two blocks. Despite the timeshare with DeAndre Jordan, Allen is having a solid season, averaging 11.4 points, 9.6 rebounds, 1.3 assists and 1.5 blocks across 47 games. The Nets next scheduled game is Saturday, away against the Wizards.