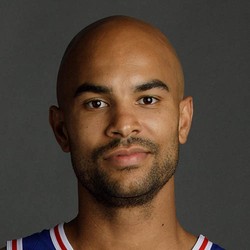 Jerryd Bayless agreed to sign with the Sichuan Blue Whales in China. The terms of the contract are yet to be disclosed, but he could theoretically make a return to the NBA at the end of the season if it is a one-year deal.

Bayless played in 34 games for Minnesota last season, where he averaged 6.1 points and 3.5 assists.

Jerryd Bayless picked up a DNP-CD despite no Derrick Rose or Tyus Jones in this game. Isaiah Canaan got the start with Jeff Teague coming off the bench.

Bayless is now droppable with Teague back and the team playing Canaan over him while Jones and Rose are out.

Jerryd Bayless scored 15 points on 50 percent shooting from the field on Saturday. Bayless added 10 dimes and three rebounds in 35 minutes of floor time.

With all of the T-Wolves injuries at PG, Bayless has emerged as the guy for Minnesota, posting back-to-back double-doubles while exhibiting solid play down the stretch in the last two games. Give him a look if he's still on the wire.

Jerryd Bayless posted his first double-double on the season in a win over the Memphis Grizzlies on Wednesday while playing a team-high 43 minutes. Bayless almost posted a triple-double as he finished with 19 points, a season-high 12 assists, and seven rebounds. He also added two steals and one three.

Bayless is worth owning in all leagues right now as a solid streamer with both Derrick Rose, Tyus Jones, and Jeff Teague out. Even with Isaiah Canaan joining the squad, Bayless is the point guard to stream.

Jerryd Bayless scored 19 points shooting 6-for-13 from the floor including 4-for-6 from the three-point line and 3-for-4 from the free-throw line. He also contributed six assists and three rebounds during his 37 minutes of floor action. He did have five fouls and four turnovers though.

Jerryd Bayless scored 30 fantasy points against the Jazz and is averaging 12.3 fantasy points per game on the season. He is being leaned on for offensive with Rose and Teague out. He remains a flex to bench role type player for fantasy owners until Rose or Teague is back from injury.