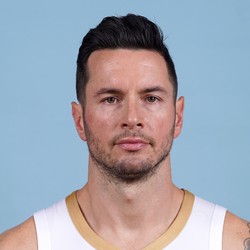 Redick has played well as of late, scoring 20 or more points in each his last three games. The 14-year-vet briefly left the game in the second quarter after colliding with Thunder guard Terrance Ferguson but returned shortly after. Redick has played an important role coming off the bench for this young Pelicans squad and that should stay the same as they look to make a playoff push. The sharpshooter heads into the All-Star break with averages of 15.5 points, 2.7 rebounds, and 2.0 assists a night.

Reddick has been hot off the bench lately, averaging 20.3 points off the bench over his last three games. While his production has been great over that span, it isn't wise to chase the points of the veteran, as he hadn't topped 20 points since early January before hitting this hot streak. He should only be considered in deeper league formats.

Outside of Sunday's zero point anomoly, Redick has been surprisingly consistent this year, scoring double digits and and hitting at least one three-pointer in every other contest since 2020 has started. The 14-year vet is averaging a healthy 15.3 points this year. While that's slightly lower that what we've seen throughout his career, he's doing so with his fewest minutes per game since the 2011-12 season and is shooting an insane 46.1% from behind the arc, good for second overall in the league. He's been a steal in DFS all season due to his relatively safe floor.

JJ Redick was instant offense off the bench as he scored 16 points in 17 minutes for the New Orleans Pelicans win over the Memphis Grizzlies. Redick shot 4-of-8 from the field, which includes 3-of 5 from beyond the arc and was 5-of-5 from the free throw line.

Redick has been playing well as of late and his value really comes from his shooting and scoring. He can be good for 15-20 points a night and can sometimes get hot and give you even more than that.