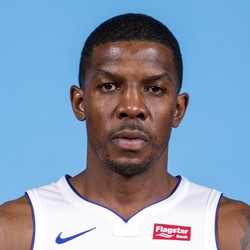 Joe Johnson has agreed to a one-year, partially guaranteed contract with Detroit. After winning the MVP award in the BIG3 league, he will make his return to the NBA to add some scoring depth for the Pistons.

The 38 year-old should serve as a solid reserve and mentor for the team, though will highly unlikely be able to translate his performances to fantasy value.

Joe Johnson hit a game-winning corner three in the Triplets' 50-39 win over the Killer 3's in the Big3 Championship on Sunday.

It's fitting that one of the most clutch players of the last decade hit the game winner in the Big3 title game. He was already slated to work out for several title-contending NBA teams, and his immense success in the Big3 bodes well for a comeback in the Association this season.

The Big 3 MVP Joe Johnson is working out with the 76ers, Clippers, Bucks, Nuggets and Pelicans.

The seven-time All-Star played 17 seasons in the NBA with seven different teams -- most recently with the Jazz and Rockets in the 2017-18 season. He won the Big 3 MVP award this season and will play in its title game Sunday. Known for his clutch shooting and penchant for big shots, Johnson could be a veteran leader in the locker room and a spark off the bench for a playoff contender. His workout with Philadelphia will be Thursday, with other team workouts coming later.

Joe Johnson will return from a two-game absence to play against the Raptors on Friday. Johnson will come off the bench behind Trevor Ariza and PJ Tucker.

Johnson's return will mean fewer minutes for Luc Mbah a Moute and Gerald Green. Any of this trio makes for a risky DFS play, as the Rockets may shorten their bench when they take on the Eastern Conference-leading Raptors.

Joe Johnson will not play on Tuesday against the Thunder due to an illness. Gerald Green and Eric Gordon are in line for more minutes with Ryan Anderson also out.

Joe "Step back" Johnson can be left on the waiver wire even with Ryan Anderson out. While in this game Gerald Green gets the biggest boost in minutes and value but he's not much more than a punt play in DFS.