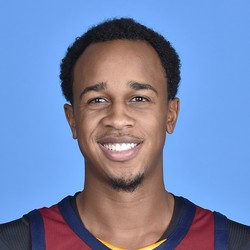 Although Henson started for the fourth consecutive game, he once again saw his playing time cut short at around 20 minutes. He has put up exactly 10 points and five rebounds in his last two games but it will be hard to trust the UNC product in fantasy if he continues seeing only 20 minutes a night. Henson and the Pistons get the Jazz on Saturday night.

Henson drew the start for the injured Thon Maker and put up double-digit points for the first time in three weeks. He should continue to start if Maker misses more time but is nothing more than a desperation fantasy play.

Aaron Larson19 weeks ago
John Henson gets the start, scores four in loss to Nuggets

John Henson provided four points (2-4 FG), six rebounds, one assist and one block across 21 minutes during the Pistons' 115-98 loss to the Nuggets on Tuesday.

Henson got the start on Tuesday, logging 21 minutes while Thon Maker only saw six minutes off the bench. The starting lineup has been in constant flux ever since the Pistons traded Andre Drummond to Cleveland, as head coach Dwayne Casey is attempting to experiment with different lineups. With that being said, it will be difficult to trust anyone besides Derrick Rose and Christian Wood from a fantasy perspective. Henson and the Pistons will travel to Phoenix to take on the Suns on Friday.

John Henson furnished 12 points (6-6 FG), four rebounds, one assist and a steal over 18 minutes in the Pistons’ 95-92 loss to the Knicks on Saturday.

Henson made his Pistons' debut Saturday, playing strong minutes off the bench in the process. Detroit's frontcourt depth is thin at best, and it's entirely possible the big man earns enough run to provide fantasy-relevant production in deeper leagues.

With Tristan Thompson out, Henson was used in the starting lineup Wednesday night over Larry Nance Jr., for matchup purposes to try to contain Steven Adams' length and size. There's a possibility that Henson see's a ton more action in the Cavs rotation with the uncertainty of Tristan Thompson's future with the team, as well as a quad injury that he's currently sidelined with. Henson averages 5.0 points and 3.9 rebounds in limited minutes this year.

Steven Smiley23 weeks ago
Should I Trade...?
Do Not Sell
Are you looking to contact Customer Support about a subscription or account related question?
Yes
No, I'm a California resident looking for the California Consumer Privacy Act form