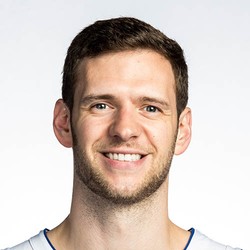 Pistons F Jon Leuer said on social media that he is officially retiring from the NBA after battling with injuries the past three years.

In his Instagram post, Leuer said, “ I love the game of basketball. I still want to play, but I know deep down it’s not the right decision for my health anymore. The past 3 years I’ve dealt with a number of injuries, including 2 that kept me out this whole season. It’s taken me a while to come to grips with this, but I’m truly at peace with my decision to officially retire.” Leuer last played for the Detroit Pistons in 2018-19, but didn’t get to play at all in 2019-20. In his eight-year career, the former second-round pick out of Wisconsin played for five NBA teams, averaging 6.4 points, 3.8 rebounds, and 0.8 assists per game. He never got through a full 82-game season, and played his best year in 2016-17 with the Pistons, when he averaged 10.2 points and 5.4 rebounds per game. He ended his post by saying, “I’m grateful for this incredible ride and everyone who helped me along the way.” Good luck to Leuer in his retirement.

Adam Koffler5 days ago
Jon Leuer waived by the Bucks

Jon Leuer was waived the by the Bucks on Tuesday.

Leuer was acquired by the Bucks in mid June for Tony Snell and the 30th pick of the 2019 NBA Draft to the Pistons. He will not take the court with the Bucks, and will try to latch onto another team this offseason. Leuer averaged 3.8 points, and 2.4 rebounds in 41 games for the Pistons last season.

Jon Leuer was traded to Milwaukee on Wednesday in exchange for Tony Snell and the 30th pick in the 2019 draft.

Leuer had a disappointing 2018-2019 campaign as he struggled to find a role in the Pistons' front court. He will likely struggle to find playing time for Milwaukee with a crowded frontcourt. Leuer averaged 3.8 points, 2.4 rebounds, 0.3 assists, 0.3 steals, and 0.1 blocks in 41 games for the Pistons last season. He has little to no fantasy value.

Jon Leuer will start Monday’s game against the Cavaliers in place of Blake Griffin (rest).

Leuer hasn’t played in any of the previous three games, but will move into the starting lineup for Monday’s game against the Cavaliers. He will see an uptick in minutes and can be used as punt play in NBA DFS.

Brad Camara1 year ago
Jon Leuer is inactive on Friday

Jon Leuer is inactive for Friday’s game against the Lakers.

Leuer has only played in two of the Pistons’ last nine games, he has no fantasy value.