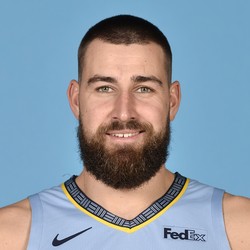 Despite losing the game, Valanciunas got the best of Nikola Vucevic on the stat sheet down low Tuesday. He's put up 27 puts and 16+ rebounds in consecutive games and is a must-start fantasy asset in another good matchup against the Trail Blazers on Thursday.

Valanciunas has now recorded a double-double in seven of his last eight contests. He has been dominating the glass as of late, averaging 16.1 rebounds during that span. Valanciunas has been providing top-50 value and will look to keep the momentum going in Tuesday's tilt against the Magic.

Valanciunas snapped his four-game double-double streak, but fantasy owners won't be upset about his statline on Wednesday. Valanciunas is averaging a monster 14.8 points and 17.0 rebounds over his last five games. The absence of Jaren Jackson Jr. has opened up more rebounding opportunities for Valanciunas and given him a temporary bump in his value. He's a great DFS target until Jackson Jr. returns.

Valanciunas has recorded at least 15 rebounds in each of his last three games. With Clarke and Jackson Jr. out for the next week, start him with confidence. The Grizzlies play the Nets on Wednesday.

Valanciunas followed up Friday's 13 & 25 game with a huge 22 & 20 game to close out a stellar February in which he snared double-digit rebounds in 10-of-11 contests. While Valanciunas's scoring dipped a bit (12.7 points), the 14.3 rebounds he averaged mark the best month of his eight-year career. Over halfway through his first full season with the Grizzlies, Valanciunas is putting up the best season of his career in a team that's a great fit for his style of play. With a roster full of young scorers, Valanciunas is the veteran cog in the paint to give his guys second chance opportunities and allows them to rack up easy assists. Valanciunas will kick off March as the sixth overall center in fantasy.