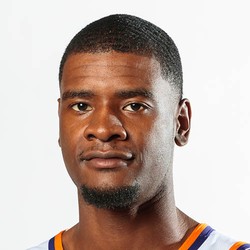 Josh Jackson has been sent to the G League Memphis Hustle.

Jackson was picked up by the Grizzlies as a developmental project after the 2017 No. 4 pick was a sound bust in two seasons with Phoenix. He’ll get a chance to show off in the minors and try to earn an NBA roster spot in the future. He’s a low-end dynasty stash with no redraft value.

Zachary Hanshew12 weeks ago
Josh Jackson traded to the Grizzlies

Josh Jackson (foot) along with DeAnthony Melton and two second-round picks was traded to the Grizzlies on Wednesday in exchange for Kyle Korver and Jevon Carter.

Jackson, the former fourth overall pick in 2017, will occupy a backup role at shooting guard and small forward. He hasn't lived up to expectations, but the Grizzlies are interested in developing him. Jackson averaged 11.5 points, 4.4 rebounds, 2.3 assists, and 0.9 steals in 79 games for the Suns last season.

Josh Jackson was arrested at a music festival in Miami, Florida on Friday.

Public records indicate Jackson was arrested and booked on one count of Escape and one count of Resisting Arrest. Needless to say, this is bad news for Jackson and the Suns. The Escape charge is a felony so it will be interesting to see if that charge results in a conviction. Jackson's legal situation will be one to watch over the summer.

Josh Jackson (hand) will be good to play on Monday against Cleveland.

Jackson seemed to have hurt his off-hand during Phoenix's last game but the coach said he's all back to normal so fire him up if you've got him. He's not efficient, but he spreads his production around.

Josh Jackson put in 10 points, four rebounds, one dime and one block in 30 minutes of game action on Saturday.

Jackson continues to struggle to find his place in Phoenix and because of his inability to find an identity, continues to put up paltry fantasy numbers. Leave him on the wire.