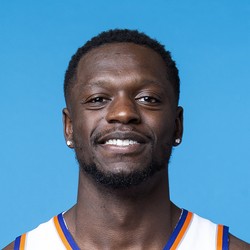 Randle has recorded a double-double in six of his last eight contests. He has been on a roll lately, averaging 22.9 points, 10.4 rebounds, 2.3 assists, 0.8 steals and 1.0 triples during that stretch. Randle is having a career-year, but his season is on hold for now until the NBA resumes play.

Randle's double-double streak ended at four in Friday's loss to the Thunder. He was two rebounds shy of recording his fifth consecutive double-double. Randle has been on fire as of late, averaging 22.4 points, 11.0 rebounds, 2.4 assists and 0.8 triples during that span. Randle will look to continue his strong play in Sunday's tilt against the Pistons.

Randle continues to do little outside of points and rebounds, hindering himself from becoming a true fantasy star. Regardless as long as he can continue to produce, he should post top-100 value. He is not a drop candidate with fantasy playoffs quickly creeping up.