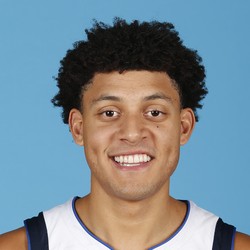 Justin Jackson finished with eight points, two rebounds, and one one block in 26 minutes of action in a win over the Nets on Thursday while starting in place of Kristaps Porzingis.

Jackson certainly has some DFS appeal with Porzingis out of the lineup. Maxi Kleber is appearing to be the add for the time being while KP is out.

Justin Jackson didn't attempt a shot and grabbed four rebounds over two minutes in the Mavericks' 114-99 loss to the Mavericks on Tuesday.

Jackson was barely on the court in Tuesday's loss, despite having logged at least 23 minutes in two of the Mavericks' last three contests. He's struggled to find minutes in his third NBA season and is averaging a career-low 13.8 per game. He's a reliable shooter with high-scoring upside, though he won't achieve fantasy relevancy without some injuries across the roster.

Jackson's performance off of the bench was a quality outing. His next opponent will be the New Orleans Pelicans who allowed 29.74 fantasy points to the small forward position during their opening game.

Justin Jackson put in 19 points, five rebounds and one dime in 33 minutes of game action on Thursday.

Jackson is hot right now, putting up 20.5 points over his past two contests. He doesn't really do much else than score, as he hasn't posted a defensive stat over his past four games so unless you're in dire need of some points, leave him on the wire.

Justin Jackson scored 18 points with five rebounds, five three-pointers, and one assist in 25 minutes off the bench in Wednesday's loss to the Washington Wizards.

Jackson's five three-pointers on Wednesday were a career-high. Since he was traded to Dallas, Jackson had only scored double-digits and played 20-plus minutes in one game as a Maverick prior to Wednesday. Still playing behind Tim Hardaway Jr. and Dorian Finney-Smith, Jackson won't likely see as much playing time as he did on Wednesday moving forward. Fantasy owners can safely leave Jackson on the waiver wire.

Edmond Carroll - The Mundo1 year ago