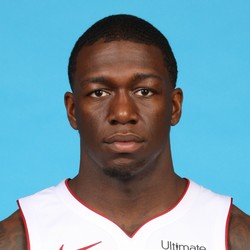 Nunn knocked down a season-high six threes in Wednesday's loss to the Hornets. With Jimmy Butler ruled out, Nunn capitalized on his opportunity by leading the Heat in scoring. He is having a productive March, averaging 13.6 points, 3.4 rebounds, 1.8 assists and 3.0 triples across five games. Nunn should be owned in all league formats. He will look to keep the momentum going once the NBA resumes play.

Kendrick Nunn was not present at practice on Tuesday due to a cold.

Nunn, fresh off an 18-point, five rebound performance in a win over the Wizards on Sunday, was not at practice today. Consider Nunn questionable for tomorrow night's bout against the Charlotte Hornets. If Nunn is out, expect Goran Dragic and Andre Iguodala to pick up some of his minutes.

Kendrick Nunn dropped 18 points (7-17 Fg, 4-9 3Pt) to go along with five rebounds, one assist, and one steal across 29 minutes in the Heat's win over the Wizards on Sunday night.

Nunn ended a rough little stretch as he only managed to average 6.5 points over his last two games but a good part of that was due to a lack of minutes. The rookie has a nice matchup on Wednesday at home against the Hornets and could see an uptick in playing time if Jimmy Butler (toe) remains sidelined.

Nunn struggled to get much going in tonight’s contest, as he failed to score in double figures for the first time in his last ten games. Fantasy owners should not be concerned as Nunn has had a fantastic rookie campaign, averaging 15.8 points per game. He should be able to get back on track on Friday against the Pelicans, which could end up being a high scoring game.

Nunn continued his impressive rookie campaign in a signature win against the Bucks. He had a career-high eight rebounds in tonight’s contest, he is now averaging 30 fantasy points per game in his last five contests. Nunn and the Heat hope to keep it going at home against the Magic on Wednesday night.