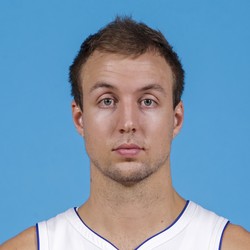 Luke Kennard hasn't had any setbacks and said both knees are "100 percent."

Kennard has been sidelined since December 21st due to a patellar tendinitis in both knees. "My knees are 100%," said Kennard. I think everybody deals with something. At the time when everything was going on, I just needed to make sure what I was doing was right for me and the team, just to make sure I was healthy. We came up with a plan, and the plan is good. It’s been working so far." The 23-year-old averaged 15.8 points, 3.5 rebounds, 4.1 assists and 2.6 triples across 15 games this year. Kennard will become a free agent this summer and was reportedly looking to land an eight-figure deal.

Luke Kennard and his representatives are "very confident that they will get an eight-figure deal in free agency," per James Edwards III of the Athletic.

The Pistons can make Kennard a restricted free agent and he is set to make $5.3 million next season. Kennard has been sidelined since December 21st due to a patellar tendinitis in both knees. He should be all systems go once the NBA season resumes. Kennard would have to prove he is fully healthy before a team would commit to an eight-figure deal. The 23-year-old averaged 15.8 points, 3.5 rebounds, 4.1 assists and 2.6 triples across 15 games this year.

Luke Kennard (knee) has been sidelined since December 21st due to a patellar tendinitis in both knees. He would have likely returned in mid-March if the NBA season wasn't suspended.

Kennard missed nearly three months due to patellar tendinitis in both knees. “We’re starting to figure out what I can do to prevent it from happening again,” Kennard said. “There’s some strengthening stuff around my legs I need to work on, some mechanical stuff, mobility stuff. It’s something I’ve got to be doing every day now, something I can prevent from happening again, which is a positive sign. Next season I want to go 100 percent. I’m encouraged to say it’s a very good possibility that I’m able to do that," Kennard said. He will become a free agent after the 2020-2021 season as his rookie deal is set to expire. Kennard averaged 15.8 points, 3.5 rebounds, 4.1 assists and 2.6 triples across 15 games this year.

Luke Kennard (sore knees) remains "a ways away" from returning to the lineup but has begin taking some contact in practice.

It's pretty clear the Pistons are entering rebuild mode after trading away Andre Drummond and buying out Reggie Jackson, so they are in no rush to bring Kennard back until he is 100 percent. Tony Snell should continue starting in his absence.

Luke Kennard (knee) may not return until after the All-Star break.

Kennard has missed the last 11 games due to bilateral knee soreness. He has yet to participate in any basketball activities, and is not expected back until the All-Star break. Sviatoslav Mykhailiuk would be the biggest beneficiary with Kennard sidelined, and is worth a pickup in deep-league formats.

Brad Camara26 weeks ago
Should I Trade...?
Do Not Sell
Are you looking to contact Customer Support about a subscription or account related question?
Yes
No, I'm a California resident looking for the California Consumer Privacy Act form