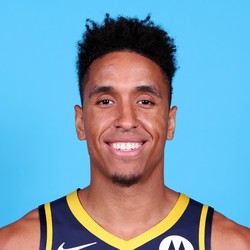 Indiana Pacers President Kevin Pritchard held a Zoom call with local reporters on Tuesday, where he said that he spoke with Malcom Brodgon and that "he’s 100 percent and ready to go.”

Brogdon has been plagued by injury throughout the season but most recently, he's been recovering from a torn left rectus femoris (hip) injury. Brogdon appears to be back to full strength and if play resumes, he'll be an asset for fantasy owners in all formats. On the season, Brogdon's averaged 16.3 points, 7.1 assists, 4.7 rebounds, 1.3 three-pointers, 0.7 steals, and a sporty 89.5% free-throw percentage across 48 games.

Tim Bontemps on Twitter is reporting that the Pacers have listed Malcolm Brogdon as out for Tuesday’s contest with the Celtics due to a torn left rectus femoris. Brogdon is considered week-to-week.

Since Brogdon’s injury, Aaron Holiday has started in his place and should continue starting. TJ McConnell will also receive extra minutes moving forward, as he’s had productive outings when called upon. McConnell is a good pick-up for fantasy owners that are in need for point guard help in deep leagues.

Per the Indiana Pacers official Twitter account, Malcolm Brogdon has been diagnosed with a torn left rectus femoris and is considered week-to-week.

The injury occurred during Wednesday night’s game against Milwaukee. Aaron Holiday started for Brogdon on Friday, and he should stick as the starter in the near-term while Brogdon is out. T.J. McConnell will receive more minutes off the bench as the Pacers look for more ball-handling in Brogdon’s absence.

Malcolm Brogdon (hip) has been downgraded to out for Friday night’s game against Chicago.

Brogdon will not suit up for the Pacers tonight with the hip injury. Aaron Holiday will start in his place and T.J. McConnell will see extra minutes off the bench tonight. McConnell makes for a very cheap, intriguing DFS target against the Bulls in Brogdon’s absence.

J. Michael on Twitter is reporting that the Pacers have listed Malcom Brogdon as doubtful for Friday’s contest with the Bulls due to a hip injury.

Brogdon sustained the injury in Wednesday’s game against the Bucks. He is scheduled to get an MRI on his hip. Monitor his status going into Friday’s game as it appears he might not be available. If Brogdon were to sit out, TJ McConnell would get a major bump in playing time and would be a nice cheap DFS play and streamer.