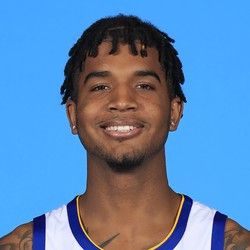 When discussing the possibility of the Warriors using their potential top-five pick in the 2020 NBA draft on Memphis C James Wiseman, Marquese Chriss stated, "I’m just thankful to have an organization that believes in me...At the end of the day, if they do draft (Wiseman), I know they’re making the best decision that they can for this team and that they feel will be beneficial for us to win a championship."

A report came out a couple of weeks ago claiming that James Wiseman was atop the Warriors draft board, suggesting that Chriss may not be in the Warriors future plans. However, Chriss' play after the all-star break renewed the Warriors confidence in his ability to man the center position next season. Chriss averaged 12.7 points (on 58.4% shooting) while talling 9.0 rebounds, 3.2 assists, 1.0 blocks, and 0.8 steals across 26 minutes in nine games after the all-star break. According to multiple sources, "the front office is so optimistic about his future, it would be comfortable entering next season with him as the starting center." Chriss provides a lot of versatility for fantasy owners as he contributes in all categories except three-pointers. If he can hold onto the starting center role, he could be a good mid-round selection for fantasy owners next season.

Chriss' fantasy value has been on an upward trajectory as of late, giving fantasy owners solid late season production with his high volume of rebounds and defensive counting stats. He wasn't able to register a steal or block tonight but the Warriors didn't play much defense as a team in this one either. Chriss will take on the Brooklyn Nets on Thursday where he'll look to extend his double-double streak to four games.

Chriss has now recorded a double-double in three of his last four games. He has been dialed in the month of March, averaging 14.5 points, 10.0 rebounds, 3.8 assists, 1.0 steals and 1.5 blocks across four contests. Chriss is locked in as the starting center for Golden State and should be owned in all standard leagues. The Warriors next scheduled game is Tuesday, home against the Clippers.

Chriss has racked up five blocks in his last three games along with achieving a double-double in two of his last three games. With no real competition for the minutes at the center position, keep starting Chriss in 10-12 team formats. He continues to provide value for fantasy owners across the stat sheet in points, rebounds, steals, and blocks.

It was Chriss' highest point total in over a week The fourth-year center has found a significant role with this Warriors team and is worth fantasy consideration in deeper leagues.