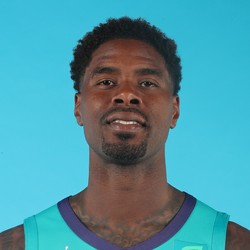 Williams made minimal impact in his debut with the league-leading Bucks. It remains to be seen how involved he'll be in the Bucks rotation down the home stretch of the season but he shouldn't be rostered in most fantasy formats at this point.

Marvin Williams will make his debut with the Bucks Wednesday night against the Pacers. He spent the majority of the season with the Hornets before being released last week.

The veteran forward will get his first chance to build chemistry with his new teammates and could see significant minutes with Giannis Antetokounmpo (personal) sitting out. He's nothing more than a desperation punt right tonight but should be kept on the fantasy radar.

Marvin Williams (not injury related) wasn't listed on Monday's injury report and is available to play against the Kings.

Williams signed with the Bucks after being bought out by Charlotte last week. He is available to play, but his role with his new team remains unclear. Williams averaged 6.7 points, 2.7 rebounds, 1.0 assists, 0.6 steals and 0.5 blocks across 41 games for the Hornets this season.

Marvin Williams failed to log any minutes in Tuesday’s 125-110 loss to the Rockets. The DNP status was not due to any injury but was a personnel decision made by the coach.

Williams' DNP designation doesn't come as a surprise, as he has failed to produce in many of his recent games. Being that the Hornets' have quickly played themselves out of the playoff picture, the focus will be on building towards the future and evaluating the potential of the young talent they currently have. Williams doesn't fit in this picture. Outside of a rare perfect scenario where Williams can pull together a solid game, he should not count as any sustainable value producer on your team. It is best to fade him in year-long play; however, he could be a greatly under-owned Hail Mary target for daily large field tournament play given the right opponent and opportunity.

Joel E. Ruffin Jr.8 weeks ago
Marvin Williams has a flat performance in loss to Magic

In a game where each bench player played 20 plus minutes, Williams was the odd man out, only securing 18. He has remained unproductive when on the floor and has shown little to no growth throughout the progression of the Hornets' 2019-2020 campaign. On the year, Williams has averaged 6.7 points, 2.7 rebounds, and 1.0 assists per game, which is tremendously underwhelming. His play isn't indicative of lack of opportunity, as he has had ample chances to be a consistent contributor, but may be indicative of a lost sense of drive and an acceptance of the player he is now rather than the player he used to be. It would be best to avoid him in all fantasy formats.