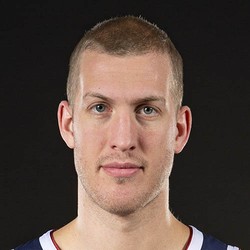 Miles Plumlee totaled nine points (4-5 FG, 1-2 FT), four rebounds and three assists across 15 minutes in the Nuggets’ 128-116 win over the Timberwolves on Sunday.

It was a typical night for Plumlee, who maintained his backup center role while playing a smattering of minutes behind Nikola Jokic. Plumlee has been very efficient on a per-minute basis this season, but barring an absence from Jokic, the former is best reserved for deeper leagues.

Mason Plumlee (foot) will be available for Friday's matchup with Boston.

Plumlee sat out 12 games leading into the All-Star break with a sprained right foot, but he's good to go Friday against the Celtics. He should resume his role off the bench, a role in which he's excelled on a per-minute basis this season. Across 17.4 minutes per contest, the Duke product has averaged 7.4 points, 5.6 boards and 2.4 dimes.

Mason Plumlee is expected to miss two to four weeks with a foot injury he sustained in Monday's game.

Plumlee had been seeing plenty of minutes of the bench in Denver's frontcourt. With Paul Millsap also out we can expect even more minutes for Jeremi Grant, Michael Porter Jr., and Juancho Hernangomez.

Plumlee has been getting decent playing time recently with some injuries to key players. This is Plumlee's third straight game with double-digit scoring. If he keeps getting decent minutes going forward, he might even become a fantasy-worthy pickup. Just keep an eye on him for a few more games to see if he's heading in a positive direction.

Plumlee nearly posted a point-per-minute on Wednesday evening, making his mark on the game with a mere 17 minutes of work. Although, he's averaged 18 minutes over the last ten contests, he doubled his average output (7.5) in that same period of time with his 15 on Wednesday. If you're hurting at the forward position in deeper leagues, then Plumlee might be worth a look. In any other situation, pass on Plumlee as he doesn't provide nearly enough upside.