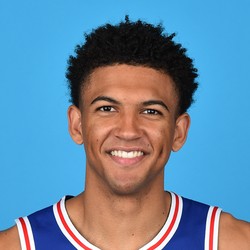 Thybulle started for Al Horford (knee) in Thursday's game against the Hawks, and produced little across 17 minutes. He has only scored double figures once in his last 11 contests. Thybulle is not worth owning in standard leagues, and is a a deep-league flyer at best. The 76ers next scheduled game is Saturday, away against the Celtics.

Thybulle swatted a career-high four shots in Wednesday's win over the Nets. With Joel Embiid out two weeks, Thybulle will continue to start and log around 20-plus minutes. If you need help with defensive categories, Thybulle can be used as a streamer. The 76ers next scheduled game is Friday, home against the Bulls.

Matisse Thybulle will miss two to four weeks with a right knee sprain.

He’s missed two games already with the injury, and his timeline sets him up to return near the end of January. The rookie has displayed plenty of promise in his inaugural campaign as a 3-and-D wing, averaging 2.1 combined blocks/steals per game while shooting 46.3 percent from down town.

Thybulle has logged at least three steals for the sixth time this season. He doesn't see enough minutes to be considered anything more than a deep-league option. Thybulle is averaging 4.9 points, 1.1 rebounds, 1.3 assists and 1.5 steals across 22 games. The 76ers next scheduled game is Friday, home against the Mavericks.

The former Husky saw big run off the bench once again, and excluding a nine-minute outing on Dec. 7, he's logged at least 25 minutes in five straight. Thybulle isn't a primary scoring option, though he's a safe bet for quality defense and three-point shooting. His playing time and well-rounded production have landed him on the radar in 12-team leagues, and at only 22% owned in Yahoo leagues, he should be scooped up off waivers where available.