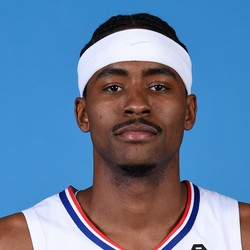 It appears Harkless' sore back will only cost him one contest, and he should be back in action for the only game on Tuesday's slate. Expect a decent workload with Paul George (hamstring) out of action again.

Maurice Harkless finished with 12 points (6-7 FG, 0-2 FT) to go along with nine rebounds, two assists, two blocks, and one steal across 25 minutes as the Clippers took down the Pistons 126-112 on Thursday.

It was noted earlier that Harkless could only provide fantasy value if the Clippers were short-handed by Injury, which appears to be the case now. Paul George (hamstring) and Patrick Beverley (wrist) could both be out over the weekend's back-to-back set and that opens the door for Harkless. He's an intriguing streaming option in deeper leagues, particularly if George sits out.

Harkless had scored a combined six points over his previous three games so today's performance didn't really move the needle. He simply doesn't contribute enough to warrant fantasy value at the moment. Barring a slew of injuries to the Clippers, he can remain on the waiver wire.

Harkless has now started all six contests so far in December while averaging a solid 27.8 minutes per game in that span. He's a better real life player than a fantasy one but he can still modestly fill the stat sheet with steady playing time. If you're in need of a stop gap at the forward position, Harkless is worth a dart throw.

Harkless drew another start, his second consecutive game, and hauled in a season-high 14 rebounds. This was an encouraging sign for the small forward as he's logged 35 plus minutes in back-to-back contests. He can provide fantasy value if the playing time is there but it's yet to be seen if he can log consistent minutes. He's at least worth adding to your watch list.