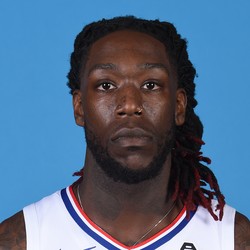 The Clippers have been blowing teams out while winning seven of their last eight games and that's led to a decrease in Harrell's minutes played. He's still putting good numbers while knocking down 77-percent of his free-throws over that eight game stretch. The Clips have a couple of days off before hosting the Nets on Friday.

Harrell was the only reserve to score over 10 points for the Clippers in a game where they only had three players score in the double digits. Harrell had shot at least 75-percent from the charity stripe in six straight games until today as well, which snapped an impressive streak for the power forward. It's hard to knock him for anything these days, though, as he's been a force on fantasy teams this season with his efficiency. He should excel on Tuesday when the Clippers face the Warriors.

Harrell tweaked his ankle on Tuesday against OKC but was no worse for wear in this one. He notched his fourth double-double in his last eight games while shooting 90-percent from the charity stripe and swatting a couple of shots. 'Trez and the Clips will look to continue their six game win-streak on Sunday against the Lakers.

Montrezl Harrell managed 16 points (5-8 FG, 6-8 FT) with three rebounds, and one assist over 20 minutes as the Clippers defeated the Thunder 109-94 on Tuesday.

The Clippers were in control for large portions of this game so a total of 13 players saw some action. Only four players, including Harrell, scored in the double-digits, which is pretty good considering he only logged 20 minutes, well below his season-average of 28. An encouraging, recent development has been Harrell's improved free-throw shooting. He shot 75-percent from the charity stripe tonight and is shooting 77-percent over his last seven games (40-52). The Clips have a day off before taking on the Rockets on Thursday.

Jon Mathisen3 weeks ago
Montrezl Harrell goes off against the 76ers

A very encouraging sign for Harrell has been his improvement in his free-throw shooting. After putting up a horrid 56.7-percent from the charity stripe in January he increased it to 75.7-percent in February. FT's have been a weakness throughout his career so this has a positive development for the veteran. The Clippers have a day off before heading to OKC on Tuesday, where Harrell dropped 18 points and hauled in eight boards in their last matchup back in December.