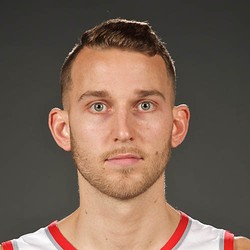 Nik Stauskas scored 17 points on Monday versus the Pistons on 5-for-7 shooting and 5-for-5 from the line. He added two rebounds, two assists, and two three-pointers in 24 minutes.

Stauskas is getting some game action after bouncing around multiple teams at the trade deadline. With JR Smith done and Matthew Dellavedova out, he will get some minutes and value the rest of the season.

Sean Fitzpatrick1 year ago
Nik Stauskas gets waived by the Pacers

Nik Stauskas has been waived by the Pacers on Saturday just after being traded to the Rockets and then to the Pacers.

Stauskas will look to sign on with another team his fourth in the last three days. He's off the fantasy radar.

Nik Stauskas has been traded to the Cavaliers in the Rodney Hood deal. Stauskas and Wade Baldwin will go to Cleveland in exchange for Hood while the Blazers also send two future second-round picks.

Nik Stauskas will not play on Thursday due to a left knee injury.

Seth Curry will pick up minutes off the bench in place of Stauskas.

Sean Fitzpatrick1 year ago
Nik Stauskas gets involved in blow out

Nik Stauskas went 5-for-7 with 13 points, five rebounds, three assists, and one steal on Friday night against the Hornets.

Stauskas got on the court for the second consecutive game and made the most of his 19 minutes.