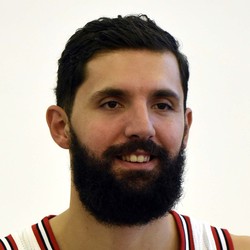 Mirotic also won MVP of the same league in 2013 with Real Madrid before joining the Bulls in 2014. He confused people when he turned down some serious interest from NBA teams last offseason to head back to Europe, but he said of the recent MVP award, "You can see it in my face, in my smile. It was a good surprise, it brightened my day.” Mirotic averaged 20 points, 5.8 rebounds, 1.4 assists, and 1.1 steals in almost 27 minutes per contest for FC Barcelona. In his five-year NBA career with the Bulls, Pelicans, and Bucks, Mirotic has averaged 12.3 points, 5.9 rebounds, and 1.3 assists per game. He did not discuss his basketball playing future and whether or not he’d be interested in coming back to the states to play in the NBA once again.

Mirotic has decided to sign a contract with Barcelona of the EuroLeague.

Mirotic was rumored to be in the market for a $40-$50 million NBA deal, but ultimately decided to sign overseas. The role player market just got a little thinner, and it's not clear at this time if Mirotic has any future plans to return to the NBA. Mirotic averaged 15.2 points, 7.4 rebounds, 1.2 assists, 0.7 steals, and 0.7 blocks in 46 games for the Bucks/Pelicans last season.

Nikola Mirotic is expected to play in Game 1 against the Detroit Pistons as he returns from a fractured thumb.

With Mirotic back, Ersan Ilyasova and Pau Gasol figure to take a hit in value and minutes. Mirotic is a risky DFS option in this series until we see he's healthy and a factor for the Bucks.

Nikola Mirotic suffered a slight fracture in his left thumb during Tuesday night's game against the Lakers. He will be sidelined for 2-4 weeks.

Mirotic is coming off of one of his best games in Milwaukee and appeared to be locked into the starting lineup. While he is sidelined you can expect Ersan Ilyasova and D.J. Wilson to see some increased time on the court.

Nikola Mirotic scored 23 points on 8-of-14 shooting from the field Tuesday, including going 3-of-7 from three-point range. He also added six rebounds and one assist in 24 minutes of play.

The 23 points are the most Mirotic has put up since joining the Bucks. He appears to be locked into the starting role in place of Malcom Brogdon (heel) for the foreseeable future, securing his fantasy value for the remainder of the season.

Aaron Larson1 year ago
Do Not Sell
Are you looking to contact Customer Support about a subscription or account related question?
Yes
No, I'm a California resident looking for the California Consumer Privacy Act form