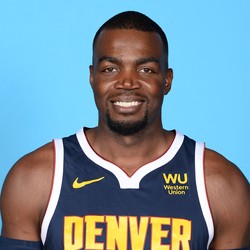 It's easy to feel a sense of disappointment from Millsap's lackluster performance on Tuesday, however, it seems far more efficient given that he only saw 19 minutes of action. He didn't shoot specifically well and didn't compensate for that with a stellar night on the glass. Millsap was just passing through on this night it seems. He's now averaged 14.2 points, 7.0 rebounds, 2.4 assists per game in his last 10 outings. He and the Nuggets will tangle with the Clippers on Friday.

Ross Jared JoswickFeb 26, 2020
Paul Millsap shoots the lights out for 25 in lopsided win

Millsap managed to post a team-high 25 points despite walking the floor for the least amount of time among the starting five. He managed to create havoc with 26 minutes at his disposal, completely eviscerating a two-point output on Friday evening. He shot 81 percent from the floor and knocked down four from long range. This type of outburst is rare for Millsap, who's averaged just under 12 points per game. So, considering this and his pension for coming up hobbled later in his career, wise owners would likely refrain from featuring him on their rosters.

Nuggets power forward Paul Millsap was ineffective in his return to the starting lineup on Friday against the Thunder, notching only two points (1-4 FG), six rebounds, one assist, one block, and three turnovers in 27 minutes of action.

After coming off the bench in his previous three games since returning from a left knee injury, Millsap had an uneventful return to the starting lineup in Friday night's loss at Oklahoma City. However, Millsap's playing time has steadily increased over the past four games and he should be a solid, low-end fantasy contributor during the second half of the season for those in need of rebounds and defensive stats.

Millsap got most of his damage done late in the game as he and Jamaal Murray led a big fourth quarter comeback. The 14-year veteran will occasionally show up with vintage nights like he did on Monday, but averaging 24.7 minutes per game this season limits his ceiling. He's averaging 11.9 points, six rebounds, and 1.5 assists so far this year. If he's available in your league he's a solid streaming option, but there are better options out there to add to your team longterm.

Millsap offered a strong showing in his return from injury on Saturday night. He only was on the floor for 18 minutes, but he made the most of that time with a 12-point double-double. If you're an owner who's managed to hold on to Millsap, his best play of the season could be on the horizon.