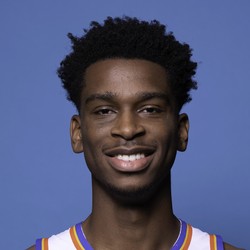 Shai Gilgeous-Alexander (hip) will be available to play for OKC tonight against Utah.

Gilgeous-Alexander will return to the lineup tonight after missing one game with the hip injury. Terrance Ferguson made the spot-start Sunday against Boston, but is likely to take on a reserve role as SGA returns.

Shai Gilgeous-Alexander (hip) is expected to return to the lineup for Wednesday's game against the Jazz.

Speaking after shootaround on Tuesday, head coach Billy Donovan said that the second-year pro "should be available on Wednesday", after sitting out Sunday's win over the Celtics. Donovan did mention that Gilgous-Alexander would be evaluated to make sure that he is on track to return, but as of now all signs point to him suiting up. Look for the Thunder to provide an official update on his status as we get closer to tip-off on Wednesday.

Shai Gilgeous-Alexander (hip) will miss Sunday's game against the Celtics due to a right hip contusion.

After being deemed questionable earlier on Sunday afternoon, Gilgeous-Alexander was downgraded to out with a right hip contusion. As a result, the 21-year old will miss his first game of the season on Sunday. Dennis Shroder is in line to receive some extra run and could benefit from the elevated usage.

Gilgeous-Alexander put up a typical stat line Friday as the Thunder cruised to victory over the Knicks. He remains a viable fantasy option on a nightly basis.

Gilgeous-Alexander was lights out on Wednesday, shooting and incredible 80% from the field and leading the Thunder in scoring. He continues to surpass expectations in his second year out of Kentucky and is leading the Thunder in scoring, second in rebounds and steals, and third in assists and blocks. He will get a night off before playing the Knicks in Madison Square Garden on Friday where he's a plug and play in all leagues.