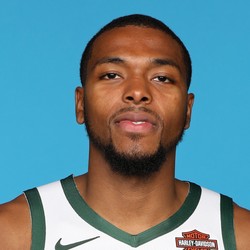 Brown took advantage of the start by putting up a season-high point total against good competition in Denver but it came on a night where the Bucks rested the majority of their usual rotation. Barring an injury in front of him, Brown is unlikely to have much fantasy impact down the home stretch of the season.

Brown put up a nice performance Wednesday night, though it represents his current ceiling with the Bucks. He isn't worth rostering in fantasy leagues at this point.

Sterling Brown will not play Monday against the Knicks.

Brown will miss his third straight game due to a shoulder sprain. Once he returns, Brown will be regulated back to the bench with Kris Middleton returning from injury. Brown is currently day-to-day.

Brad Camara26 weeks ago
Sterling Brown (shoulder) out on Saturday

Sterling Brown has been ruled out for Saturday's game versus the Hornets with a sprained AC joint.

Pat Connaughton, Wesley Matthews and Donte DiVincenzo will see additional minutes with all options not that appealing in fantasy.

It was business as usual for Brown, who hasn't made much of an impact fantasy-wise in his third NBA season. Across 16.1 minutes per game, he's averaging 6.1 points and 4.8 assists, though he's had some quality rebounding efforts on the year. If you need help with rebounds, he's a desperation play in deep leagues, though there's likely a better option on the waiver wire.