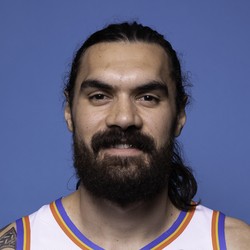 Adams logged double-digit points for the first time in the last four games to go along with his double-digit rebounds. He's been inconsistent lately but remains capable of putting up a double-double on any given night.

Adams has failed to score double digits or make a free throw over his last three outings. He's made up for it by averaging 8.0 rebounds, 2.7 assists, and 1.3 blocks but after a six game double digit streak where he averaged 15.3 points, it's frustrating to see his offensive production disappear lately. He has a good matchup on Friday as he should be able to use his size against the aging and undersized Taj Gibson when the Thunder travel to New York.

Adams has come back down to Earth, failing to notch a double-double in his last four games after doing so in his previous four straight. He one of the less relevant centers in the current fantasy landscape.

Adams finally cooled off from his five-game hot streak, ending Thursday’s contest with a still-respectable final stat line. The Kiwi center has looked impressive following the All-Star break, and he’ll need to keep up his high level of play as Oklahoma City pushes for an improbable playoff bid.

Adams appears to have found his stride after struggling through the first half of the season. The veteran center just missed his fifth straight double-double by a single rebound Tuesday but will look to start a new steak Thursday against the Kings.