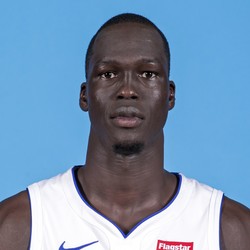 Thon Maker scored 11 points in 20 minutes in Friday's loss to the Grizzlies. He grabbed eight rebounds, dished two assists, and stole one ball.

Starting in place of the injured Andre Drummond again, Maker put up another solid outing. In his two starts he's put up 10.5 points, nine rebounds, 1.5 assists, one block, and one steal per game. That type of production is better than what we've seen through Maker's career so far, but doesn't elicit enough excitement to discuss his fantasy relevance, especially once Drummond returns and Maker is relegated back to his 10 minutes per game off the bench.

Thon Maker started in place of the injured Andre Drummond and scored 10 points, grabbed 10 rebounds, had an assist and a steal, and blocked two shots. He went 8-of-11 from the free throw line over 23 minutes.

Thon Maker got his fourth start of the season and in turn posted the first double-double of his career, as well as setting a career-high in rebounds. Even though he started and played a career game, he was outplayed by Christian Wood who played more minutes. The seven-footer is still buried on the depth chart and won't have any fantasy relevance unless Drummond gets traded before the deadline.

Maker provided just his fourth double-digit scoring output of the season, doing so on an efficient shooting night Saturday in just 11 minutes of action. The tall and lanky forward has failed to crack Detroit's regular rotation this season, despite a laundry list of injuries, and he's not worth a look outside the deepest of leagues.

Maker's 19 minutes matched his second-highest total of the season, but the lanky forward managed a small stat line. Heading into the night, he's averaged 2.8 points and 2.4 rebounds over 13.5 minutes per game, though his playing time could be reduced further as Blake Griffin works his way into game shape. Maker needs to remain on waivers, even in deeper leagues.

Maker who replaced Blake Griffin in the starting lineup, struggled to produce in a spot start against his former team. With Griffin sidelined, he continues to start and play 20 plus minutes. Despite starting, Maker has only averaged 3 points and four rebounds in his last two games. He's not a relevant option in DFS for Wednesday's NBA three-game slate.