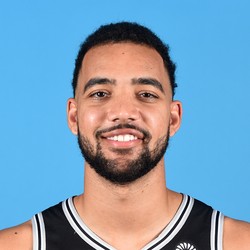 Lyles isn't a high usage player for the Spurs, but he's sees enough minutes in the frontcourt to rack up the occasional double-double. He can be considered fantasy viable in deeper leagues.

Lyles is stepping up with LaMarcus Aldridge sidelined. He's averaged 16.3 points over his last four games compared to 6.2 points per game on the season. If Aldridge remains sidelined Lyles will continue to have fantasy relevance.

Lyles exceeded expectations on Monday night by nearly quadrupling his average point total on the season. He knocked down a season-high four three-pointers and collected six rebounds. Lyles' impressive stat-line is easily a product of the absence of LaMarcus Aldridge in the lineup, so the prospects of looking at him long term aren't likely. He's now averaged 5.7 points, 5.7 rebounds and 1.1 assists on the season.

Lyles did his best Tim Duncan impression on Saturday, scoring 20 points, snaring tough rebounds, blocking shots, and leading the team in minutes in a hard-nosed win. Unfortunately though, these games come few and far between as Lyles has only reached the 20-point mark twice this season, both in the last few weeks. Still, coach Gregg Popovich is giving Lyles the opportunity for more minutes as he averaged 26.6 per game this month after just 17.9 in January. While Lyles hasn't strung together enough consistent outings to warrant ownership in yearlong leagues, he's an intriguing DFS play as shown by Saturday's statline. He'll finish February with 10.1 points, 5.6 rebounds, 0.9 steals, 0.7 assists, and 0.6 blocks.

Lyles came up three points short of his career-hig, but given the 10 boards that he peppered into last night's performance it's safe to say that this was the best game of his five-year career. Lyles has started nearly every contest this season and only turned in 5.3 points, 5.7 rebounds, and one assist per game. This appears to be his absolute ceiling and while a 23 and 10 game is exciting, his season averages should be enough for you to keep him on your waiver wire.

Dave Kluge21 weeks ago
Should I Trade...?
Do Not Sell
Are you looking to contact Customer Support about a subscription or account related question?
Yes
No, I'm a California resident looking for the California Consumer Privacy Act form