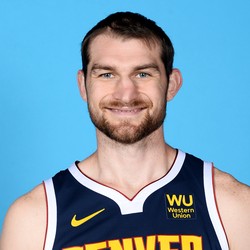 Center Tyler Zeller has signed with Denver on a non-guaranteed training camp deal after playing for the Hawks and Grizzlies last season.

The veteran player has been moving around teams his entire career. This is a wait and see approach, but he's likely not worth any fantasy value.

Tyler Zeller agreed to terms with the Grizzlies for the rest of the season.

Zeller is in line for some minutes with Joakim Noah injured. He could pick up a couple of minutes behind JV but is off the fantasy radar.

Tyler Zeller has been waived by the Bucks as the team will keep Christian Wood with its final roster spot.

Zeller will look for another NBA team which is possible. Even if signed, he's off the fantasy radar so is Wood. Brook Lopez is more of a late-round flier in re-draft leagues.

Tyler Zeller started Tuesday night against the Thunder due to majority of the starting lineup out due to rest. Tyler Zeller led the team with minutes on the floor with 32. Zeller scored total of 17 points shooting a solid 4-for-8 from the floor including 2-for-2 from the three-point line and 7-for-8 from the free-throw line. Zeller also contributed seven rebounds, three assists, and a steal.

Tyler Zeller is showing the Bucks organization exactly what he can do in the starting role. Problem is Zeller is in a crowded position with Brook Lopez, John Henson, Ersan Ilyasova, and Thon Maker. Look for Tyler Zeller to be a fantasy free-agent type player to start off the fantasy season.

Tyler Zeller did not take a single shot attempt in 10 minutes on the floor after drawing the start for the Bucks. Zeller did contribute three rebounds, one assist, and one steal. If John Henson is out again for Game 6, Look for Zeller to draw the start over Thon Maker.

Zeller remains a fantasy free agent in all leagues across the board until a string of good performances occurs from the Bucks center. Once John Henson returns, Zeller will return to the bench role.