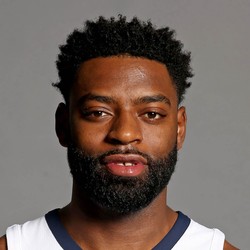 Tyreke Evans led the Pacers with 19 points off the bench in their game 3 loss to the Celtics on Friday night.

Evans is averaging 13.3 points in this series as the Pacers have looked anywhere for scoring. Seven Pacers' players scored in double figures on Friday night, but only Evans shot over 50 percent from the field. If he shoots the ball well early in game 4, we'd expect him to receive an increase in minutes in hopes to save their season.

Tyreke Evans (soreness) is out in Sunday's game against the Brooklyn Nets.

Evans had been given more minutes with Darren Collison missing a few games. Now that Collison is back, and Evans is out, Evans's extra minutes will be given to other bench players like Corey Joseph and Aaron Holiday.

Tyreke Evans led the Pacers in both points and minutes against the Warriors with 20 and 29, respectively. He added five rebounds and two assists.

It was Evans' second straight productive game. The Pacers have struggled offensively and he's given them a minor lift off the bench. His minutes have been way up too, indicating that when he is on he will be rewarded. Evans' situation should be monitored by owners, particularly if the rest of the team continues to struggle.

Tyreke Evans played 29 minutes on Thursday against the Warriors. He had 20 points, five rebounds, and two assists during the 112-89 loss. Evans made 8-of-17 shots from the field with one three-ball.

Evans has seen an increase in his minutes and production the last two games with Darren Collison out. In those two outings, Evans has averaged 19.5 points, 6.5 rebounds, and 4.5 assists per game. Watch the injury report for Collison's status for Sunday's game against the Nuggets before considering a spot start for Evans.

Tyreke Evans will play on Saturday against the Denver Nuggets after missing the previous game for persona reasons.

Evans won't take much fantasy value away from Bogdan Bogdanovic and Wesley Matthews but he will take some minutes.