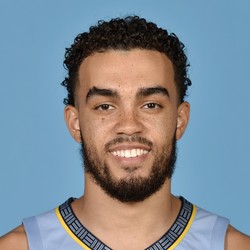 Jones shot an impressive 5-of-6 from beyond the arc. His five three-pointers in the game was a season-high. Some of the production was due to the game being a blow out. His production should regress to the mean on Friday against the Mavericks in a pivotal matchup for playoff seeding.

Jones came into this game averaging 7.4 points, 2.2 assists, 1.4 rebounds, and 0.8 steals over his last five outings. Playing backup behind Ja Morant doesn't leave much of an opportunity to get quality time on the court, but Jones shot 60% from the floor and dished nine assists resulting in a fine fantasy outing. He finished Monday as the fourth overall point guard in DFS and made for a phenomenal value for anyone that had the foresight to play him.

Jones made the most of his limited opportunity, scoring a hyper-efficient 16 points and leading the team with a +27 plus/minus. Jones is quietly having a very nice start to February, scoring double digits in 83% of his games. He's averaging 13 points, 4.7 assists, and 1.7 rebounds over those six games. Ja Morant is in no danger of losing his starting duties to the fifth-year backup point guard but Jones is worth a long-shot play in DFS tournaments while he rides this mini hot streak.

His perfect shooting night was the only time he accomplished it this season. After averaging six shots on the year, Jones has averaged over nine shots in the past three games. Continue to monitor his usage. The Grizzlies play the 76ers on Friday.

Jones had an unusually-high scoring performance, though his counting numbers were right on par with his season averages. After a career year with the Wolves last season, Jones has seen declines in scoring, assists and rebounds, though he remains a high-caliber option on a per-minute basis. If rookie sensation Ja Morant was forced to miss time for any reason, Jones would be an immediate fantasy starter in 12-team leagues.

Zachary Hanshew24 weeks ago
Should I Trade...?
Do Not Sell
Are you looking to contact Customer Support about a subscription or account related question?
Yes
No, I'm a California resident looking for the California Consumer Privacy Act form