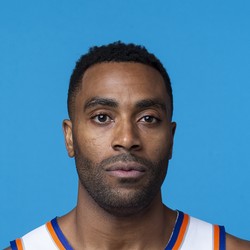 Wayne Ellington scored zero points, had two rebounds, and two assists in nine minutes off the bench in a 136-131 overtime win over the Hawks.

Ellington on the season is averaging 5.1 points, 1.8 rebounds, and 1.2 assists a game. He doesn't score enough or receive enough minutes to warrant using him in fantasy. It is unclear when the next NBA game will be due to the coronavirus.

Ellington has buried at least one triple in his last three games, but was off the mark by shooting 20 percent from downtown in Wednesday's loss. He has only scored double figures once in his last four contests. Unless fantasy owners desperately need threes, Ellington is only an in deep-league formats. The Knicks next scheduled game is Friday, home against the Thunder.

Wayne Ellington was limited in Saturday's practice due to a strained right ankle.

Ellington on the season is averaging 5.1 points, 1.6 rebounds, and one assist a game. His fantasy value is low, but has played better of late averaging 10.2 points during the last 10 games.

Wayne Ellington is questionable for Friday's matchup with the Pacers due to a strained right ankle.

Ellington's status should be updated closer to tip-off, but for now, he should be considered a game-time decision. He scored at least 12 points in three of four games before the All-Star break and will look to keep up his solid play on offense if he can take the court Friday.

Wayne Ellington scored five points and had one assist in 15 minutes off the bench in a 114-96 loss to the Wizards.

Ellington on the season is averaging 5.1 points, 1.6 rebounds, and one assist a game. He has played well during the last 10 games averaging 10.2 points. His next match up is with the Indiana Pacers after the All Star break.

Craig Rosenkrantz21 weeks ago
Should I Trade...?
Do Not Sell
Are you looking to contact Customer Support about a subscription or account related question?
Yes
No, I'm a California resident looking for the California Consumer Privacy Act form