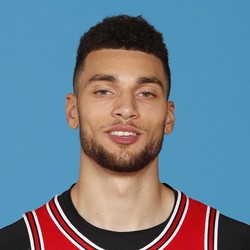 LaVine has hit the 30-point mark in three of seven games so far in February where he is averaging 26.3 points, 5.3 assists, 5.0 rebounds, 2.3 steals, and 0.7 blocks per game. LaVine went on a tear after his All-Star snub and it might be tough for him to keep putting it all on the court every night for a team with an apparently lost season. With Coby White stepping up and looking great over the last couple of games, Wendell Carter Jr. and Otto Porter Jr. both nearing a return, and Lauri Markkanen progressing through his rehab there is chance that the Bulls can start to make a playoff push which would be great news for LaVine's fantasy production. However, if this team doesn't start to click with a fully healthy lineup, don't be surprised to see LaVine's fantasy value start to dip.

After two blisteringly-hot games against Philly and Washington before the All-Star break, LaVine has been cold from the field in his last two outings, going a combined 16-42 from the field and 3-15 from long-range in that span. Still, the sixth-year man is getting his points thanks to a high volume of shots, and his contributions outside the scoring column have been healthy.

LaVine has been on a tear the last couple of months but his 19 point performance on Thursday was his second-lowest output of the new year. LaVine took public offense to his lack of All-Star consideration and that chip on his shoulder may have fueled him to start off 2020. Since January started he has been averaging 28.5 points, 5.2 rebounds, 4.6 assists, 1.7 steals, and 0.6 blocks. With the Bulls' season being all-but-mathematically-over and LaVine showcasing that he was worth an All-Star spot, he may start to regress a bit as the season moves forward. With nothing to prove and no chance of playoffs the Bulls will face off against the Suns on Saturday night.

That's back-to-back games where LaVine has hit the 30-point mark and his eight drained three-pointers tied his second best of the season. He racked up a chunk of his points in the final minutes as the Bulls attempted to come back from a big deficit, but unfortunately it was too little too late and the Bulls lost their sixth straight. LaVine had a killer January by averaging 28.5 points, 5.2 rebounds, 4.4 assists, 1.5 steals, and 0.5 blocks. While regression was expected he's starting off February with 28.3 points, 5.5 assists, five rebounds, 2.3 steals, and 0.5 steals over five games and shows no signs of slowing down. Keep the electric shooting guard plugged in your lineup every night.

After a red-hot January where he averaged 28.5 points per game and scored 30 or more in 42% of his contests, LaVine hit the 30-point mark for the first time in February in Sunday's outing. Only three games into the month, he was clamped down to only six three-point attempts in his first two games and was able to fire off 10, making five, on Sunday. While his scoring might look slightly down recently, he's a threat to drop 40 any given night and is netting top-five returns for the shooting guard position. He and Bulls will face the Wizards on Tuesday, who he is averaging 27 points, six rebounds, six assists, and two steals against over two contests this season.