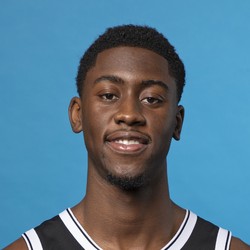 Brooklyn Nets G/F Caris LeVert took to social media on Sunday to remind his fans that he’s eager to get back on the court after working out hard during the NBA shutdown amidst the coronavirus pandemic.

LeVert posted a picture of himself in the gym where it looks like he’s added a good bit of muscle to his frame during the shutdown. He added, “I hear it all! Believe I’m working.” LeVert seems poised to pick up right where he left off when the season got postponed in mid-March. LeVert had been on fire after the All-Star break, leading the Nets to a formidable record while Kyrie Irving and Kevin Durant remain out due to injury. In those 11 games after the break, LeVert averaged 24.1 points, 5.3 rebounds, 5.4 assists, and 1.6 steals per game. He was quietly putting up top-25 fantasy production in 9-cat leagues and should continue to do so while Irving and Durant are likely to remain on the sidelines even if the season resumes.