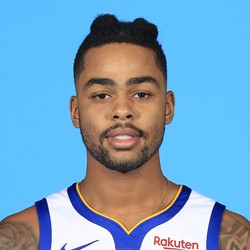 In an interview with senior writer Jon Krawczynski of The Athletic, Timberwolves G D'Angelo Russell stated, “this is where I’m supposed to be.” Russell was referring to the warm reception he received from fans and the Timberwolves organization upon arriving at the Minnesota airport after being traded by the Golden State Warriors on February 6, 2020.

Russell expanded on his feelings, revealing that, “for me to come here, this feels more at home to me... like I could settle down, raise my family and unpack my bags.” The article provided great insight into Russell's yearn for stability after being on four teams (Lakers, Nets, Warriors, and T'Wolves) within the first five years of his career. Interestingly enough, he is one of only 14 active all-stars to have played for four or more franchises. D-Lo inked a 4-yr $117M contract with the Nets in July 2019, as part of a sign-and-trade with the Warriors so Minnesota will be his home for the foreseeable future. He's only scratched the surface with his new-look team, averaging 21.7 points, 4.6 rebounds, and 6.6 assists in 12 games for the Timberwolves this season.