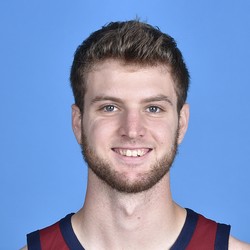 Dean Wade finished without a contribution in the box score across two minutes in the Cavs’ 115-100 win over the Pistons on Monday.

Wade appeared in his eighth NBA contest Monday, logging two minutes as Cleveland emptied its bench in the blowout victory. The Kansas State product has averaged just over six minutes per contest in his rookie season, spending most of his time in the G-League.