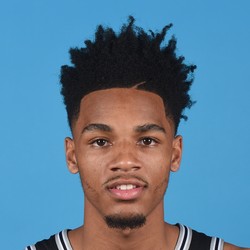 Dejounte Murray (calf) picked up a strained calf late in Sunday's loss to Cleveland and is currently without a timetable for a return.

Based on the original report, it looks like Murray could miss a good bit of time after sustaining a calf strain on Sunday. The news is brutal for the Spurs, who have been without LeMarcus Aldridge and are currently fighting for the last playoff spot out West. The third-year pro has been playing well as of late, averaging 13.8 points, 6.3 rebounds, 4.8 assists and 2.5 steals per game during the month of March. Derrick White and Lonnie Walker IV are in line for some extended run in Murray's absence.