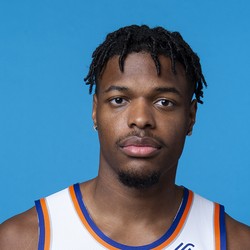 Dennis Smith Jr. scores four points off the bench in loss to the Wizards

Dennis Smith Jr. scored four points, had four rebounds, and one steal in six minutes off the bench in a 114-106 loss to the Wizards.

Dennis Smith Jr. on the season is averaging 5.2 points, 2.3 rebounds, and 2.8 assists a game. His fantasy value has taken a hit because of lack of playing time. Elfrid Payton is the starting point guard and Frank Ntilikina is the first point guard off the bench. His next match up is with the Indiana Pacers after the All Star break. In two games vs. the Pacers, Smith Jr. is averaging 3.5 points.