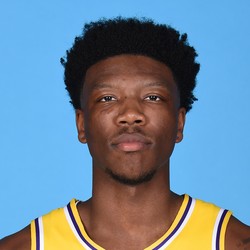 Devontae Cacok was named to both the NBA all-G League first-team and all-rookie team.

Two-way forward, Cacok was named to the all-G League first-team and all-rookie team. The undrafted rookie out of North Carolina-Wilmington dominated as he averaged a double-double for the season. In 33 games with the South Bay Lakers, he managed 19.4 points, .8 assists, 1.1 steals, and 11.9 rebounds per game and shot 65.9 percent from the floor and 57.9 percent from the free-throw line. Cacok did not register a game with the Lakers this year; however, with his outstanding play, it would not be surprising if that changed for next season. If Cacok continues his strong play by capitalizing on his strengths of scoring and crashing the boards, a direct pathway into the Lakers rotation could open for this young player, especially as the Lakers continue to define and tighten their front-court. Although his fantasy relevance is zero at this time, he could be worth a look later down the line.