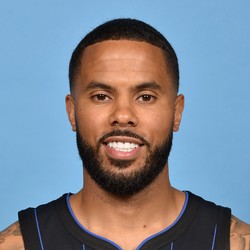 D.J. Augustin scored 24 points on 7-for-10 shooting with two rebounds, three assists, one steal and four three-pointers in 27 minutes as the Magic defeated the Rockets on Sunday night.

Augustin has taken on a bigger role the last two games with fellow guard Evan Fournier out for an extended period of time. The veteran is worth picking up in deeper leagues for fantasy owners needing assists and steals.