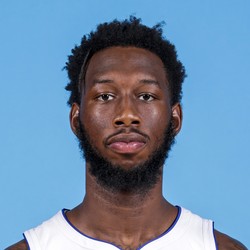 Donta Hall to sign rest-of-season deal with the Nets

Marc Stein is reporting on Twitter that the Brooklyn Nets are signing forward Donta Hall for the remainder of the 2019-2020 NBA season.

After coming to terms with Jamal Crawford and Michael Beasley on Wednesday, the short-handed Nets had one more spot to fill before play resumes later this month in Orlando. Hall, who went undrafted in 2019, spent most of the season in the G-league before signing a 10-day contract with the Pistons in late February. Although he only appeared in four games with Detroit before the NBA season was suspended, Hall was impressive during his time in the G-League. Through 38 games with the Grand Rapids Drive, the Alabama product put up 15.4 points, 10.5 rebounds and 1.3 blocks per game while shooting 66 percent from the field. He figures to add some depth behind Jarett Allen and newly acquired forward Michael Beasley while in Orlando.