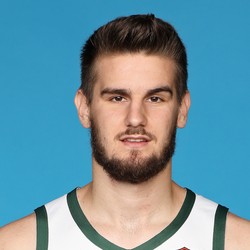 Dragan Bender surprises with 23 points off the bench in loss

Dragan Bender played his best game as a Warrior on Tuesday night, contributing 23 points (8-12 FG, 5-5 FT), grabbing seven rebounds, dishing out three assists, and knocking down two three-pointer's in 25 minutes in a 131-107 loss to the Clippers on Tuesday.

Bender, on his second 10-day contract, played great off the bench for the Warriors by shooting an efficient 67% from the field. Bender's scored in double figures for the second consecutive game but doesn't warrant a pickup in 10-12 team formats since he does not receive consistent minutes or have a high usage rate in the Warriors system.