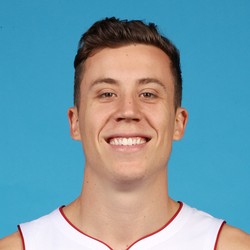 Robinson entered Wednesday's game red hot from downtown, shooting an incredible 61 percent in his previous four contests. He struggled in Wednesday's loss ,as he was only able to knock down 3-of-13 from beyond the arc. Despite the bad outing, Robinson has been lights out from three-point land in March, burying 30-of-57 triples across five games. He should be owned in all standard leagues. The 25-year old guard will look to rebound from Wednesday's outing once the NBA season resumes.